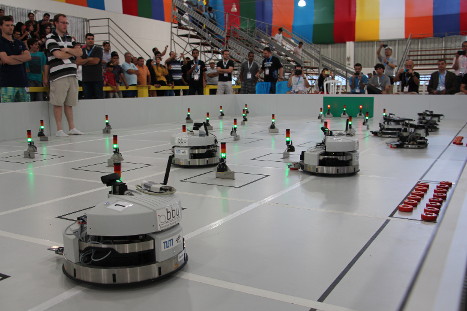 We the Bavarian Bending Units (former TUMsBendingUnits) are a joint team of motivated and skilled members from the Technische Universität München (TUM), namely the chair Robotics and Embedded Systems (Prof. Knoll), and the German Aerospace Center (DLR), namely the Institute of Robotics and Mechatronics (Perception and Cognition, Dr.-Ing. Suppa).

Since 2011 we participate in the Logistics League sponsored by Festo within the RoboCup community.

The RoboCup was founded in 1997 with the vision of developing a robot-soccer team until 2050 that is able to win against the world champion of the FIFA football world cup. Next to the holding of robot soccer games, several other disciplines arose during the last years. Currently teams are also encouraged to compete in Rescue, @Home, Logistics, @Work and RoboCup Junior leagues against each other.

The Logistics League was set up in 2010 as a demonstration league for industrial applications and is sponsored by Festo since then. In 2012 the league got promoted to an approved major league of the RoboCup with continuously growing importance. The Logistics League enables scientific work for solving logistical problems inside a dynamic production environment with multiple self-organizing autonomous mobile robots. The robots are currently based on the robot platform Robotino from Festo, but can be modified individually in terms of hardware. In order to provide a high rate of product deliveries in due time, the teams have to achieve an efficient, precise and flexible material and information flow within the production hall. From 2014 on both competing teams operate within the same production environment at the same time, which also requires dynamic collision avoidance and increased spatial coordination complexity. This league offers an interdisciplinary approach in the fields of Mechatronics, Computer Science and Logistics in order to deal with all the challenges and requirements further described in the Logistics League Rulebook, including dynamic production plans, out-of-order machines, recycling, changing delivery gates and a random machine distribution.